It’s me again with another little blog regarding my recent pairs match on Hunts Corner on the Linear Complex in Witney near Oxford.

This time sees me reaching the Final of the Southwest Carpers Pairs Championship Shield final with my Partner in Crime Frano Pavey.

It all began back in April when both me and Frano won our qualifier round which was held on Todber Manors Big Hayes Lake with a total of 10 fish for 203lb, which secured us a place in the final.

So for the last few months I have been doing a lot of research on how to approach Hunts Corner as I have never fished this lake before and with work and family commitments I was unable to go there and do a reccy.

On arrival to the lake on the Friday morning myself and Frano spoke to a few anglers that were leaving the lake to see if many fish had been out and we were told that there was alot of fish holding up in the middle couple of pegs on the lake.

As this match was not a watercraft draw, all pegs were pulled out of the bag, we decided that we were not going to walk the lake and we would let faite decide our outcome.

It was now about 9am and the draw was to take place at 10am, and my nerves were starting to build up as they always do.

As the draw took place we were 4th out the bag which is always nice to get an early pick, I looked at Frano and he said your turn to draw, we drew Peg 7 which we were both happy with as it had some open water spots as well as a little bay which had some shallow water, considering there was sun and temperatures of 22 degrees for the next couple days, also the wind was slowly pushing down into us which was good news as I had been told the fish will follow the wind.

Finding spots and Baiting up was not allowed until 11am, Frano found some  spots out in open water and I concentrated on the Bay to my right and found a lovely spot at about 75yrds which was big enough to place both my rods on, I opted to fish my trusty Flurocarbon D Rig using tiger nuts tipped with fake corn due to the amount of Crays in this lake.

At midday the second hooter went which was the start of the match, within 2 hours my Right hand rod went which took us by surprise as we had not seen many fish in the bay there was more shows in open water over Frano’s Baited spots, then in the next few hours we managed to pick up 3 more fish in quick succession so going into the first night we were on 4 fish for 84lb and currently sat in 1st place. 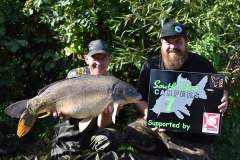 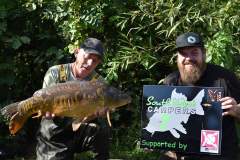 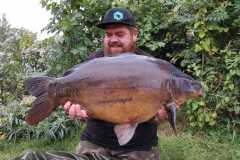 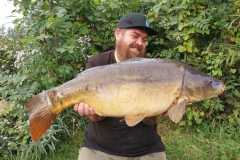 …then on Friday evening the wind changed and it seemed the fish had moved out, we had no bites for the next 24 hours. We both persevered with our spots by regular baiting and by Saturday tea time we had managed to land another fish which kept us in first place, but again the fish moved out of our bay….”

“…when we woke up on Sunday morning we were told we had dropped to second place as the guys in Peg 4 which is located in the middle of the lake had a busy night and caught multiple fish, and that we were only 3lb ahead of 3rd place.

However, the wind direction changed again in our favour during the last 2 hours and we decided to put some more bait out. With just 30mins left to go in the match we landed the last fish of the competition to secure 2nd spot. We ended up with 6 fish for just over 130lb…”

“…we fished Flurocarbon D Rigs with tiger nuts tipped with fake corn soaked in the PURE SWEET Over the top of a mixture of Hemp, Corn, crushed Nuts and UltraNut boilie all soaked in the NUTmino